A downloadable game for Windows

Play as Splodey, a bomb with an explosive spring in his step! Use his exploding jump to traverse rooms and solve puzzles. Destroy all of the orange blocks and TNT to progress through the levels!

NOTE: This game is currently in early development, so this demo is mainly to get some feedback and thoughts! We will be updating this game regularly. It currently includes 30 levels of explosive fun!

Watch out! Be sure to avoid jumping into pitfalls, running into spikes or standing in front of a cannon when it goes off!

Shoot cannons by detonating near them  or using TNT to ignite them!

Remember, cannons only have one shot, so use them wisely...

Use spring boards to get extra height on your jumps! 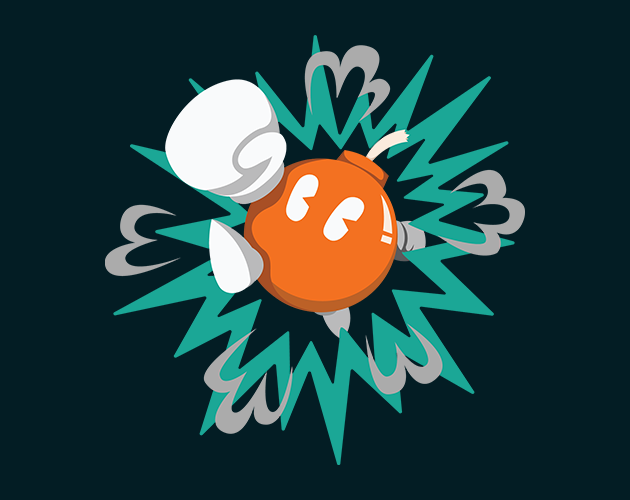 Please leave a review or comment. Thanks for playing!

What game engine do you use?

All done in GameMaker Studio 2.

Super Awesome, super fun. The feel of this game reminds of namco games. something I love. check it out

Thanks so much for making a video. Glad you guys had fun playing :)

Love the game. Will be playing a part 2. I want this game to succeed.

Very nice little game! I really like the main mechanic, it allows for some interesting puzzles.

There was one particular room that was tougher to figure out for me than any others. It was Level 19. I still think i didn't beat it in the intended way. I left the stage with 2 cannons still unused. Oh well, I beat it anyways.

EDIT: I didn't put 5 stars because of the menu, try to polish it, for the rest, very good game!

No problem! There will be a full version out this year, with lots of improvements and additions, so stay tuned :)

Thaks for adding controller support! It's great to know you are listening to feedback. Made it through the rest of the levels, I hope you enjoy!

Awesome man! So glad you were able to finish it. Gonna have a full version out this year.

really cool game with super cool style. The fact that is equally parts a platformer and a puzzle game really clicks with me

Thanks so much! Really appreciate it :)

it feels nice to move around in and really nice animations! it's a really fun concept

whoever did the animations needs a promotion! also i think there would be a great market on mobile...

Thank you! The art/music/sound/coding was all done by one person (me), with some help from a friend doing level design! Would love to have this game released on mobile one day. Will need more content though

Amazing Game, fun unique music and amazing smooth animations in the 1.1 update the controls are amazing and I love how it's free!

Thank you for commenting I really enjoyed it

This game art and gameplay is BOMBTASTIC!

Great game! I finished it in one sitting.

I swear I passed a few levels not as designed...

My main feedback is you should remove the transitions after death.

So far, this is an amazing game that was very fun to play. My only problems with it were how pressing the opposite direction of a wall you were on would make you fall off, (i feel like you should have to jump to leave walls) And i think that you could have made some amazing backgrounds and stage themes. Overall though, for a game very early in development this was really fun!

Thanks for your feedback! We have updated the game (currently 1.1) Which includes controller support as well as an updated wall jump. Should feel a lot better now.

Having only played with the new wall jump, I'm going to say it feels strange.

Not only is it inconsistent with the rest of the movement, I found myself having to slide all the way down a wall because jumping would harm me. I'd say that requiring a jump to get off a wall would be good if you specifically want to make it a decision/commitment you want the player to have to think about. If this is not the case, you could maybe allow the player to move off the wall after holding away for a second or so?

This game is great, we covered it on the itch.io YouTube channel. My only request would be to add gamepad support. The puzzles were interesting and the mechanics are fun. (The pixel art is great too)

Thanks so much! We have just updated it to V1.1, which includes gamepad support along with a few other small changes/additions!

Cool. If you don’t mind, can you add some screenshots on your project’s edit page? We’ll put up a larger featured banner on the homepage for you but we need images. They won’t change how your page looks since you’ve set screenshots as hidden in the theme editor.

Like the game but now I have to hear this music in loop: https://www.youtube.com/watch?v=iNwSpoXnvWM

and I hate this music.

The animations are amazing, I never imagined a bomb could be so cute. The puzzles can be pretty challenging, so it's not super easy which is good.

The only problem is that you can only use the direction keys for moving, and it's not very comfortable for my right hand to move fast enough to scale walls effectively. Like I'm not old, but I'm already developing arthritis in my hands and after not having any problems all day, after just 30 minutes of playing this, I've been nursing the flair up all the wall jumping brought about for the last few hours. So could you please add either controller support (preferred) and/or wasd (cause most peoples and my hands are more use to moving in games with them).

Other than that, the game is fantastic, and I look forward to playing some more, but with only being able to use the dir-keys, I don't want to take the risk of hurting my hand again.

Made a video, hope you enjoy!

Ah I'm really sorry to hear about your hands! In the next version of the game (1.1) there will definitely be WASD controls! And we will be adding controller support in future instalments. Thank you so much for your kind words regarding the game, and for your really great video too :)

We have just updated the game to V1.1, which now includes Gamepad support. Hope you like it!

Heads up: "some newer Mac OS have some issues with files downloaded, so you may need to change your security/privacy settings in system preferences" isn't really the case -- you'll need to notarise the mac build to make this problem go away (vs. asking players to disable system security settings which is kind of a turn-off). It's not that hard to do!

I have this problem. What does notarise mean and how do I do it?

This is a useful (easy!) guide that I follow for Unity builds, but if you just ignore the Unity bits it's generally a good step-by-step: https://gist.github.com/dpid/270bdb6c1011fe07211edf431b2d0fe4

Hi, thanks for the notice! We're currently working on sorting out the Mac build at the moment, v1.1 should be out in a few days. It also includes updates such as a save/load/level select option, as well as a pause menu.

Thank you so much! Really means a lot. We're going to be updating the game to v1.1 in the next few days, which has a few minor improvements. However we are also working on adding a lot more levels/features, which will be in the next main version, coming out pretty soon hopefully!

Looks like there's a problem with the mac version. I'm getting this error.

“BOMBASTIC v1.0” is damaged and can’t be opened. You should move it to the Trash.

Hi, thanks for your feedback. We're aware of this problem. Apparently newer operating systems on Mac don't make it easy to open certain files downloaded from the internet, so you need to change your security/privacy settings in system preferences I think. It's not a damaged file, just something to do with the privacy on some macs :)

Thanks for the tip, unfortunately it didn't work :( We had a similar issue with our game Scales when we uploaded it to Itch so we zipped it on the mac before uploading it and that worked. Maybe that will help?

Will try that. There will be a new version updated today, including saving & level selection as well as a pause menu.

Cool, looking forward to trying it :)

The mac client is downloaded as a damaged file. Is this something on my end?

Hi, yeh we've had a few people experience this. It's not a damaged file, but some newer Mac OS have some issues with files downloaded, so you may need to change your security/privacy settings in system preferences. We are also updating the game today to ver 1.1, so keep an eye out for that!

I like the game a lot! Very nice controls, soundeffects, and color palette.

It would be awesome if I could quit the game and play on where I left off. I pressed escape once, expecting a pause menu where I could see the controls because I forgot the key for restarting the level (also, an exit option). However, instead it took me to the start screen and I had to redo all the levels I already finished.

Also, I felt the game was overall too easy, especially the last level. The four levels before that were a lot harder (for me personally). My favorite levels were those where I was time-limited by the exploding blocks, i.e. when I had to parkour through a level to finish it. Also, the puzzle-ish ones where I had to stare a while figuring out where I had to start exploding blocks.

If it's possible, it'd be cool to be able to play it in browser mode.

But again, very satisfying to play due to the controls, music/soundeffects, and the color palette is imo very pleasing. Thanks for making it, I had fun!

Hey! Thanks a lot for the kind words. Totally agree with your feedback, we have started on implementing a save system already, so it will definitely be a feature in the upcoming version :)

Cooltastic the game of the Orange Bob-Omb with Rayman hands.